I’ve spent 8 cumulative months traveling through Vietnam, from Sapa in the North to the Mekong Delta in the south and just about everywhere in between.

But the differences between East and West, coupled with the innumerable cultural subtleties that make Vietnam unique, are still apparent nearly everywhere you go.

While I’m certainly no expert, I did end my Vietnamese adventure by marrying a Vietnamese man (!). Not only have I observed the many differences between American and Vietnamese culture firsthand; I’ve been able to pick my husband’s brain about each of them.

Here are 7 things you should NEVER do while travelling through Vietnam:

#1: Put sugar in your coffee 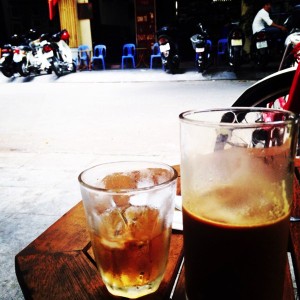 I order a ca phe sua, and am brought black coffee instead. Disappointed and confused, I ask the waitress for sugar. She shakes her head “no,” but I insist. She finally agrees, and brings me several sugar packets.

I dump the packets into my coffee and begin to stir. As I stir, the condensed milk that had been poured into the bottom of the cup begins to swirl and sweeten my coffee in the traditional way.

Whoops! If your coffee looks black in Vietnam, give it a stir before adding sugar!

My boyfriend (now husband) has brought me to his village in the central coast to meet his parents. He hasn’t seen his mother in six months. We pull up to the house and she greets us at the door. My boyfriend gets off the motorbike and starts chatting with her like they’re continuing a conversation from earlier in the day.

When I ask him why he didn’t hug or kiss his mother in greeting, he looks confused. “We never do that” he says.

Interestingly enough, the entire family is very physically affectionate with each other – just never during hellos or goodbyes.

#3: Bring a cat into the house 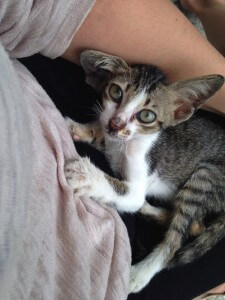 A tiny, starving stray kitten nuzzles my feet at a coffee shop in Hoi An. I have a friend who rescues strays (so they don’t end up in a restaurant), so I scoop her up and take her home to my guest house. My plan is to give the kitten some food and water until my friend can come pick her up.

The grandmother of the guest house erupts in anger as I enter, swinging a broom at me and the cat. She shoos us outside and won’t let me in for the rest of the day.

Imagine my surprise to learn that

Talk about a faux pas.

My boyfriend is upset with me and I can’t understand why. After some prodding, he reveals the source of his discontent: I keep saying “thank you” when he picks me up, buys me dinner, or compliments me.

In Vietnamese culture, thanking someone with “cam on” is very formal. It means you and the other person are strangers and don’t know each other well. The idea is that if you’re close with someone, of course you’re going out of your way for them. No thanks are necessary.

Check your impulse to pet and coo over the many stray dogs in Vietnam. Dogs aren’t much better than cats, and are considered (and usually are) quite vicious. I once pet a puppy in boyfriend’s village and the entire room full of people looked at me like I was completely insane. When in Vietnam, think of dogs like you would a rat back home (or continue petting, but don’t let your Vietnamese friends see you!). 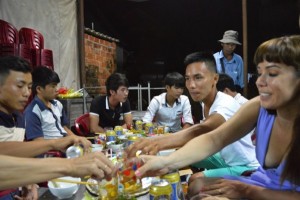 When dining with friends, it’s a faux pas to drink beer at your own pace. Every sip of your beer is meant to be a communal toast that everyone shares together. Only after a cheer of “mot, hai, ba, uong!” should you take a drink. If you’re really thirsty, feel free to start the next toast yourself!

#7: Be affectionate in public 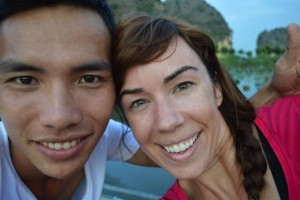 It’s not appropriate to be physically affectionate with your significant other in public in Vietnam. More and more young people can be seen holding hands in public, but anything beyond that is a definite faux pas. My sweetie thought he could steal a smooch in a noodle shop once, and we ended up getting asked to leave!

Have you ever committed a cultural faux pas while traveling? What was it and where were you? Let us know in the comments below!

Rebecca Anne Nguyen is a freelance writer and the Founder of TheHappyPassport.com, an inspiration site for solo female travelers and digital nomads. Follow her on Twitter @Happy_Passport and Instagram.